$1.4 Million Awarded to Family for Loss of Teenage Son 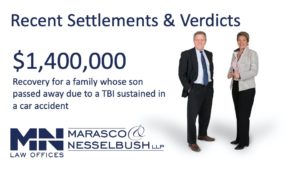 In a horrific case involving the tragic death of a teenager in a high-speed accident, Marasco & Nesselbush clients were awarded $1.425 million for the loss of their teenage son. While no amount of money can undo the harm caused to these parents, our firm is proud to have assisted the grieving family through this difficult process and has obtained a sum allowing, among other things, the creation of a memorial park in the young man’s honor.

Unfortunately, our client was the victim of alleged reckless or negligent conduct by another teenage driver. There were allegations that the operator may have been drinking, though there was no proof of legal intoxication. The defendant’s insurance company initially argued that the victim was partially responsible for his death because he had chosen to ride with the defendant and had not gotten out of the vehicle after the defendant began to drive recklessly, as had another passenger. They also argued that the value of the family’s loss was low due to the fact that the decedent would have been an adult soon after his death.

Under Rhode Island’s wrongful death statute, the parents of the deceased are entitled to recover loss of familial society damages valued through his 18th birthday, any provable pre-death pain and suffering and lost economic value to the estate.

Our firm retained economic experts to establish the financial losses to the estate based upon the young man’s demonstrated work ethic and academic performance. Most importantly, however, the $1.4 million award included damages for familial loss of society for the parents of the seventeen-year-old. The key to establishing the damages in this case was demonstrating the strong, loving relationship that both parents had with their son.

After filing a lawsuit and proceeding to an arbitration, Marasco & Nesselbush resolved the case for the maximum available from the defendant’s insurance company together with the maximum available from the two underinsured motorist policies. While we acknowledge that no amount of money can ever really make such a loss bearable, at least this young man’s family can now do things to dignify his life and preserve his memory.