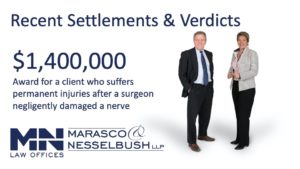 Attorneys Mark H. Grimm and Timothy Lynch recently achieved a 1.4 million dollar settlement on behalf of a patient. The patient, who underwent a recommended surgery, claimed that the surgeon negligently damaged a nerve during the surgery, causing permanent injuries.

Defendants strongly denied that the nerve was injured and asserted that the patient’s complaints and condition were the result of other diagnosed medical conditions. After extensive work up and preparation, including multiple depositions and medical research, and after engaging and preparing top experts in the field, the matter was resolved shortly before what was expected to be a lengthy trial.