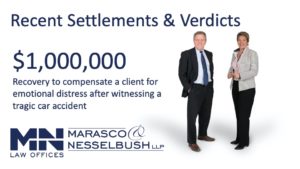 One fall afternoon, our client and his coworker stepped outside their workplace for a brief mid-day break. The two were standing inches away from one another, having a casual conversation next to their building, when out of nowhere the coworker was struck and killed by a reckless driver.

Our client, fortunate to escape with his life and without direct physical harm, would go on to suffer tremendously from significant mental and emotional injuries. He required years of psychiatric and psychological treatment, was affected deeply in his personal life and would lose his livelihood. He came to Marasco & Nesselbush to see what recourse was available to him. Attorney Tim Lynch was hired to represent him.

Tim worked contemporaneously with a criminal investigation and a private investigator, gathering evidence and preparing the client’s civil case. Complicated legal issues arose which prevented the client from recovering directly from the individual that was directly responsible for the tragedy. Attorney Lynch raised a claim with the client’s own insurance company pursuant to the client’s uninsured motorist bodily injury coverage.

Undeterred, and confident that the law was on their side, Attorney Lynch filed a lawsuit on the client’s behalf, alleging breach of contract and bad faith against the insurance company. The case was litigated, and experts were retained. As the case approached trial, the insurance company, for the first time, began looking to settle. Ultimately, the client recovered the entire value of all applicable insurance coverage, $1,000,000. These funds have helped him rebuild his life and to provide financial stability for his future.